10-Year Plan for DC Films in the Works, Modeled on Marvel

“You look at Batman, Superman, Wonder Woman, Aquaman, these are brands that are known everywhere in the world,” Zaslav said. “And the ability to drive those all over the world with great story is a big opportunity for us. We have done a reset. We’ve restructured the business. We’re going to focus where there will be a team with a 10-year plan focusing just on DC.”

“It’s very similar to the structure that Alan Horn and Bob Iger put together very effectively with Kevin Feige at Disney. We think that we could build a long-term, much stronger, sustainable growth business out of DC and as part of that, we’re gonna focus on quality.”

The CEO called out Dwayne Johnson’s upcoming “Black Adam” as a DC film he’s excited about, with the “Shazam!” and “Aquaman” sequels also on tap. But Warner Bros. has struggled from the jump to keep up with Disney’s Marvel Cinematic Universe, soft-launching with 2013’s Superman reboot “Man of Steel” before filmmaker Zack Snyder steered an interconnected DC Cinematic Universe that struggled to coalesce for critics and audiences.

The existing DCEU reached a nadir with 2017’s “Justice League,” which was heavily reshot and panned by critics and audiences alike. There have been bright spots to be sure — 2017 also delivered the critically acclaimed “Wonder Woman,” and the Jason Momoa-fronted “Aquaman” grossed more than $1 billion in 2018.

With Zaslav taking a closer look at the Warner Bros. Pictures portfolio, course-correcting DC is a priority, and part of that plan involves planning out the next 10 years of DC films.

The CEO’s comments came on the heels of the news that Lady Gaga will be starring alongside Joaquin Phoenix in a sequel to 2019’s Oscar-winning “Joker” (which exists outside of DCEU continuity), and months after Warner Bros. greenlit a sequel to “The Batman” with Robert Pattinson returning (also outside DCEU continuity). 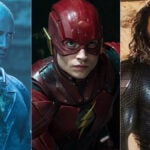 Zaslav’s explanation of WBD’s plan for DC Films was just one of the many questions both Hollywood, Wall Street and fans were looking to the CEO for when Warner Bros. Discovery went into its first earnings report as a merged company on Thursday:

After the results dropped, it became clear that the company’s revenue had missed Wall Street analysts’ expectations by nearly $2 billion and just slightly missed on total direct-to-consumer subscriptions growth.

And while many were looking for some clear answers surrounding WBD’s planned combination of streaming services HBO Max and Discovery+, the company didn’t have a lot of specifics to share. It did reveal a launch date and that it was going to try to take the best of the services — the tech from Discovery+ and the user experience of HBO Max, for example — and reach the broadest customer base possible with the new streaming service’s combined scripted and nonfiction library. No new name, no real clarity on how HBO Max will be rolled into Discovery+, no pricing information — but promises to reveal those things and others at a later date.

And regarding spiking the “Batgirl” movie, Zaslav elaborated on why it no longer rose to the level of his vision for a DC film.

Read more here: Warner Bros. Discovery CEO Explains Why He Killed ‘Batgirl’: ‘Our Job Is to Protect the DC Brand’

If Zaslav wanted to soothe Wall Street, he also missed on his own expectations. The company’s stock was down as much as 14% after market close.

Ne-Yo’ Wife Files For Divorce, Claims He Had A Kid With Another Woman

‘The Flash’ Release Still a Go Despite Ezra Miller Scandals

The Crown’s Lesley Manville stuns on the red carpet premiere of Mrs. Harris Goes To Paris

'The Flash' Release Still a Go Despite Ezra Miller Scandals

2Pac Turned Down Michael Jackson Collab Due To In-Studio Conflict