A majority of Texans support a woman’s right to choose abortion, but that has yet to emerge as a significant factor at the ballot box, according to an exclusive Spectrum News/Siena College poll.

The U.S. Supreme Court overturned Roe v. Wade in June, saying each state should decide on the right to abortion since the Constitution was silent on the issue. If that right were based on likely voters — and not elected officials in Texas — it appears that it would lean toward preserving a woman’s right to choose.

What You Need To Know

The Spectrum News/Siena College polled asked two questions: Do you support the recent Supreme Court decision that overturned Roe v. Wade? Do you support the Texas law passed last session that makes performing most abortions a felony, with the only exception being to save the life of the mother? On both questions, the majority of those surveyed answered no.

“We saw support — really, overwhelming support, among Texans for Roe v. Wade. They were against the Supreme Court decision,” said Professor Don Levy, director of the Siena Research Institute, which conducted the survey. “The only group that supports the Texas law is a small majority — 56% — of Republicans.”

People in many statistical categories opposed it, Levy said. The opposition included Democrats, independents, most women and a large majority of voters under 30.

Specifically, when asked about the U.S. Supreme Court overturning Roe v. Wade, 93% of Democrats were opposed to the decision. Among Republicans, 67% supported it. The group most directly impacted by the decision, ages 18-34, opposed the decision by 72%. The groups most favorable to the legal decision were over 50, rural and white.

Laws passed by the Texas legislature in 2021 to limit abortion — and punish those who perform abortions or aid women in getting abortions — were viewed even more unfavorably. Overall, only 31% supported the law. Republicans were the only group to show support, at 56%. The law was strongly panned by voters in urban areas and by those under 35.

Even more striking was the fact that these anti-abortion laws — passed only a year ago — were well-known in every age group and demographic. Only 5% of those polled either had no opinion or were unaware of the law. In liberal-leaning Austin, that was down to 0%.

“I think what our polls say is if Texas was like Kansas, and there was a referendum on the ballot — where Texans were allowed to vote specifically on the abortion legislation — the pro-abortion forces would prevail because that’s what the numbers tell us,” Levy said. “They tell us 55% oppose the Dobbs ruling, and even by a wider margin, 64% are opposed to the Texas legislation that prohibits abortion, except in the cases of the mother’s health being at risk.”

A total of 23 states, including Kansas, have a popular referendum process that allows voters to approve or repeal an act of the legislature. Twenty-four states have a citizen initiative process where citizens can bypass the legislature and put a statute on the ballot. Texas has neither.

These numbers would show abortion would be an issue that resonated with voters, but according to the poll, that concern did not translate into action at the ballot box. 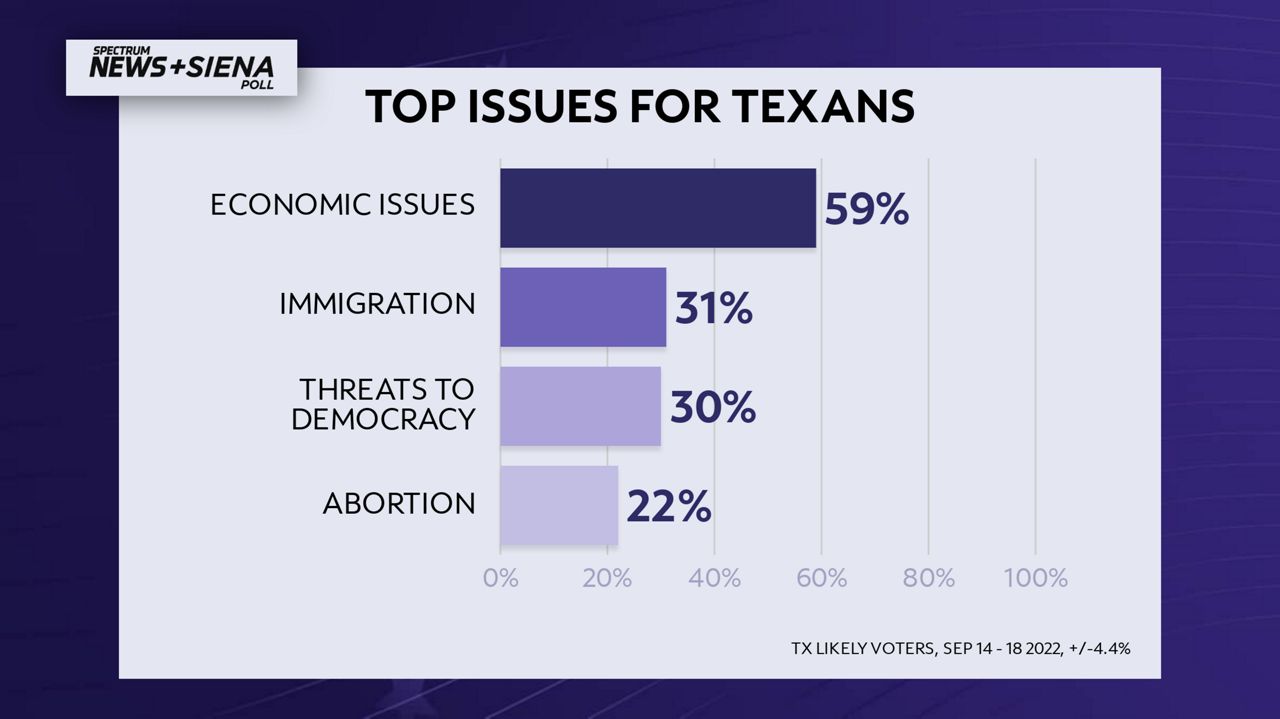 When asked to rank which issues were most important in the November election, voters across the board ranked the economy as the No. 1 issue. When No. 1 and No. 2 issues are combined, abortion is only ranked overall by 22% of the voters. The issue was most important to only 10% of Republicans and 35% of Democrats.

“We live in a representative democracy, so abortion is only one issue. And, at best, it’s the fourth most important issue,” Levy said of the Texas poll. “If you want to swing voters, it’s most important to Democrats, but I think their vote is already in the Democratic camp. It’s not an overwhelmingly important issue to either Republicans or independents who are going to make a difference in this election.”