The former Manchester City defender hoped that football would become even bigger in the Middle East region after the Qatar World Cup, which begins on November 20

Barring the incomparable Novak Djokovic, few Serbian athletes have scaled the heights like Aleksandar Kolarov has in the past 10 years.

Winner of two Premier League titles with Manchester City and one Serie A trophy with Inter Milan, Kolarov retired from the game four months ago as one of the greatest Serbian footballers of all time. 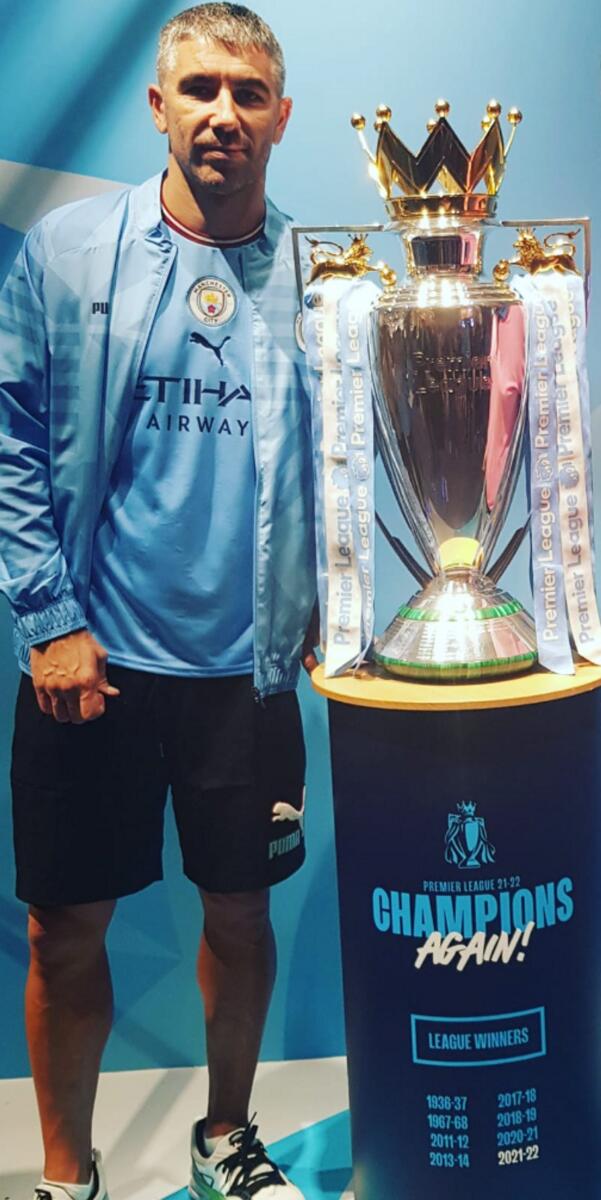 On Friday evening at the Dubai Mall, Kolarov was posing with hundreds of City fans alongside the glittering Premier League trophy, without ever giving a hint of tiredness.

The 36-year-old was patiently obliging each and every fan, while standing beside the famous trophy that he lifted twice as a City player.

But Kolarov admits that his greatest joy as a footballer was defending the colours of the Serbian national team at the World Cup.

“The emotions are special because when you start to play football, your dream is to play for your national team in the World Cup,” Kolarov told the Khaleej Times.

“It’s a massive feeling when you arrive at a tournament like the World Cup. You feel a lot of emotions and it’s a big pride you feel when you are defending the colours of your country.

“It’s a special event for all the countries and for all the players that are representing their countries. To play in a World Cup is a massive thing for a footballer.”

Kolarov hoped that football would become even bigger in the Middle East region after the Qatar World Cup, which begins on November 20.

“Obviously, the World Cup is a very big event. I think it’s going to help develop the game in this region. So I am looking forward to it,” he said.

Kolarov, who captained Serbia at the 2018 World Cup in Russia, is also looking forward to watching his top three favourite teams in Qatar.

“Brazil, Argentina and France are my top three teams,” he said.

“I think Brazil have lots of quality, solid players in the back (defence), they are solid in the midfield and they also have a lot of quality up front (strikers).

“I think Argentina, they have (Lionel) Messi. And France, they have top strikers and I think they have the most solid team in Europe.

“So yes, Brazil, Argentina and France are my top teams.”

The defensive stalwart who was famous for his lung-busting runs into the opposition half, then revealed his admiration for Erling Haaland, the new Manchester City striker who leaves defenders for dead with the economy of his movement.

The Norwegian has taken the football world by storm since leaving Borussia Dortmund for Man City this summer, scoring 15 goals in just 10 Premier League matches.

“He is a top-level striker. He has just adjusted very well to the Man City style of football. I think he could score even more goals, he has already scored 15 goals. I think he is going to reach an even higher level,” he said.

The Serbian then predicted another successful campaign for Pep Guardiola’s Man City, which have won four of the last five Premier League titles.

“I think we are the favourites to win the title again, so we have to play consistently like we are playing this season. If we can do that, we are not going to have any problem winning the title again,” he said.

But will Arsenal, the early pace-setters, pose a challenge to City’s ambitions?

“It’s going to be a tough race. Tottenham also have a good squad, with a very good coach (Antonio Conte),” he said.

“Chelsea is always there. Liverpool and Arsenal, like you said, are doing very well. So it will be very tough, but City have got more chances to win the title again.”