Lupita Nyong’o, Danai Gurira and Letitia Wright are set to hit cinema screens in just over a month for the much-anticipated release of Black Panther: Wakanda Forever.

And the trio have opened up about filming following the tragic death of their co-star Chadwick Boseman, admitting they took the love they had for him and put it into the film.

Detailing the action film’s poignant undertone, Letitia explained: ‘I’m praying that this film helps all the people who have lost people.’

Chadwick portrayed titular character of the Black Panther franchise, King T’Challa, and died from colon cancer in 2020, at the age of 43.

‘I’m praying that this film helps all the people who have lost people’: Lupita Nyong’o (left) Danai Gurira (centre) and Letitia Wright (right) have revealed that the new Black Panther film is filled with love for late co-star Chadwick Boseman

And carrying on his memory are the three of the movie’s leading ladies – with Leitita portraying the character of Shuri, Lupita playing Nakia and Danai taking on the role of Okoye.

Covering the November issue of Elle Magazine, the actresses detailed how Chadwick’s memory will live on in the movie – and detailed what it was like working alongside one another.

Explaining that they ‘took all the love we had for him and took it into the film’, Letitia described herself, Lupita and Danai as the late actor’s ‘sisters’.

‘In the moments that we have joy, I just sense him kicking back, laughing with God, like, “Wow, look at my sisters,’’ We took all the love that we had for him and we put it into the film,’ she detailed. 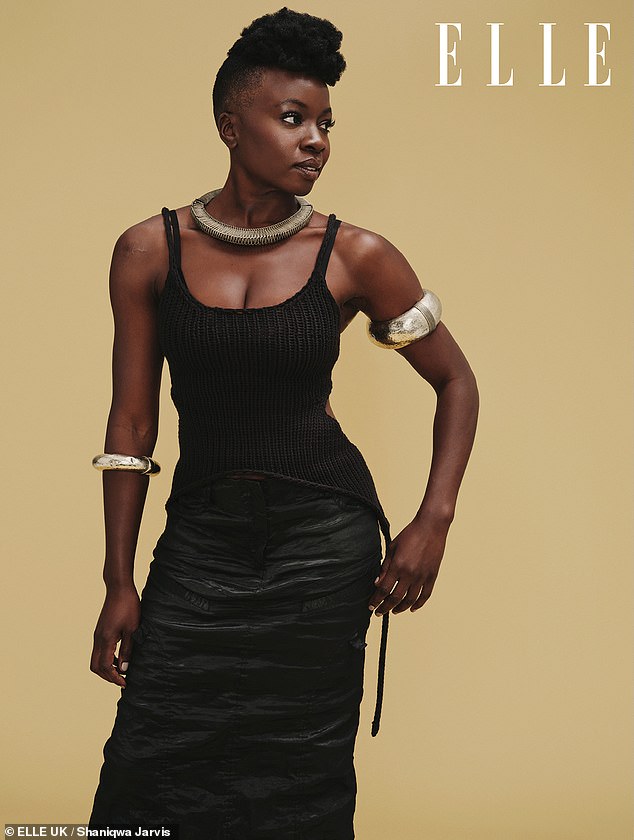 In spirit: Danai admitted that despite Chadwick not being on the set during film – his presence was felt greatly by the cast 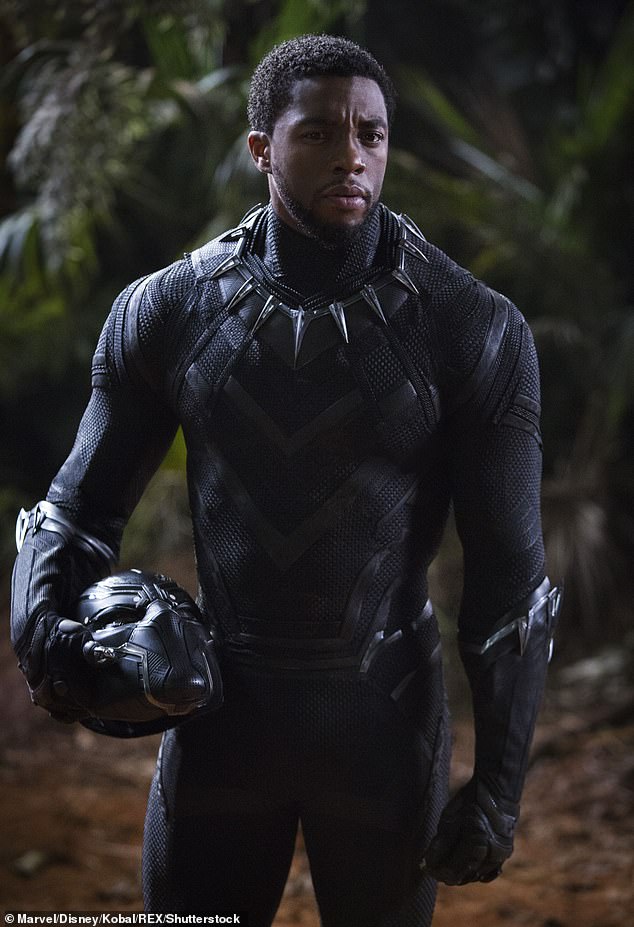 Heartbreaking: Chadwick portrayed titular character of the Black Panther franchise, King T’Challa, and died from colon cancer in 2020, at the age of 43 (pictured in character, 2018)

Continuing: ‘You wish you held on to him longer, but he’s not here. So all that you have is to piece together the memories and what he’s left behind. Make it beautiful and give it back to the world. I’m praying that this film helps all the people who have lost people.’

Dania echoed her co-stars comments, admitting that despite Chadwick not being on the set during film – his presence was felt greatly by the cast.

‘There was something very steadying about thinking about what he would do or how he would function.

‘He had such an astounding presence and beautiful energy that was always grounding and generous and present – and yet could also be very quiet and calm,’ she said. 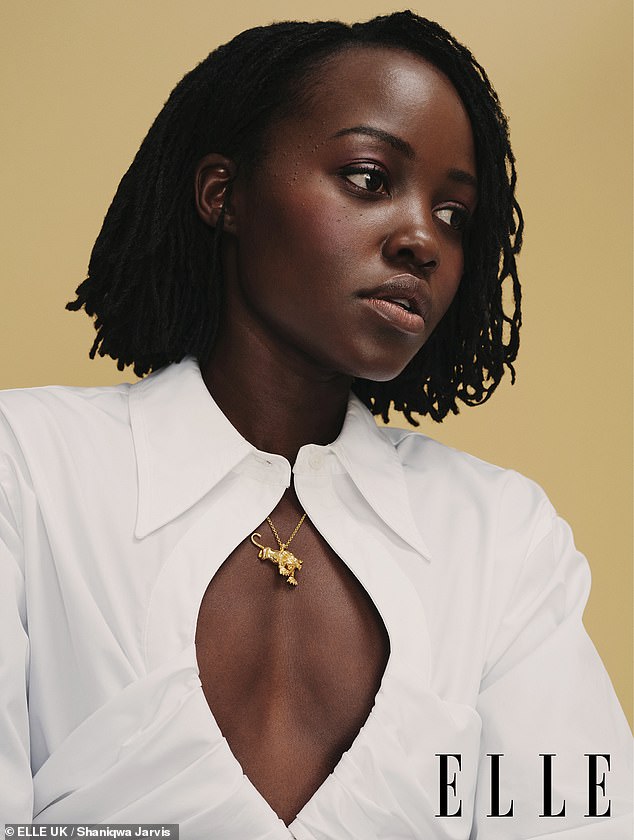 Grief: Luptia shared how the film’s director, Ryan Coogler, offered ‘ a raft out of a deep sea of grief’

Chadwick discovered that he had stage three colon cancer back in 2016, before it progressed to stage for – with the actor passing away in his Los Angeles home four years later.

Production for the film began in 2021, with Lupita detailing how director Ryan Coogler changed the film’s storyline following the news.

She explained: ”Ryan had already walked me through what the film was going to be before Chadwick’s passing. When he called me months later to talk me through the new idea, taking into account the gravity of what we’d all gone through, I remember dreading the conversation.

‘But then I felt a breath of relief when I heard what he had in store. He offered a raft out of a deep sea of grief.’ 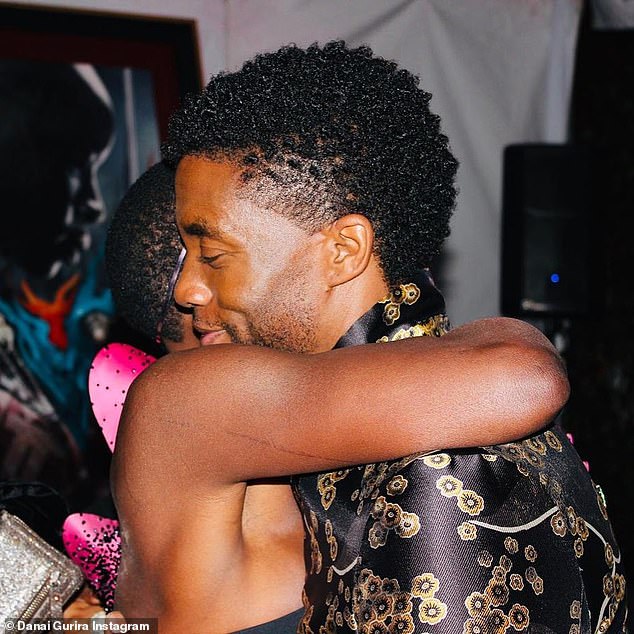 Sibling bond: The screen stars described themselves as ‘sisters’ to Chadwick (Danai pictured with the late actor) 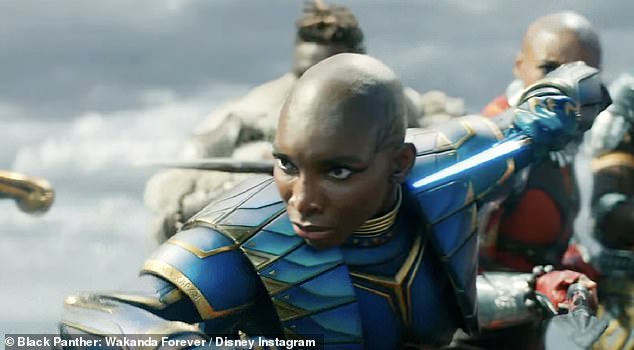 Storyline: The film will show Wakanda dealing with the death of King T’Challa – as the nation mourns and moves along

The group will band together with Nakia (Lupita) and Everett Ross to form new alliances following the big change.

And explaining the importance of a female-driven and diverse cast, Lupita shared: ‘We get to see them be fully human. That’s something that, as Black women, we are often not afforded on-screen. And there are so many female characters. All too often in these movies, there’s a token one or two. Here, you’re seeing a community.’

While Letitia admitted that she, Danai and Lupita ‘hold each other up’ as she described the moment they did a scene together as ‘beautiful’

‘It was a delicate scene, but there was so much beauty in it and so much laughter. We held each other up in ways that we didn’t get to do before,’ she shared of her co-stars. 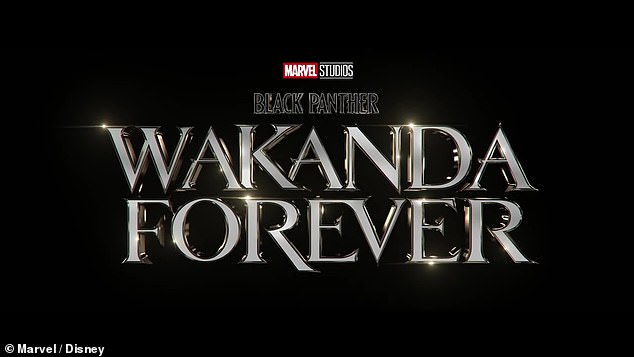 Tia Mowry On Teaching Her Daughter Self Love

Tia Mowry On Teaching Her Daughter Self Love