Okoye & The Dora Milaje Star In Lexus’ ‘An Electric Campaign’

Marvel fans and car lovers can buckle up and take a ride with Okoye and the Dora Milaje who shine in Lexus’ “An Electric Future” campaign featuring the luxury brand’s first-ever battery electric vehicle.

The thrilling campaign marks Lexus’ third collaboration with a Marvel Studios property ahead of the release of Marvel Studios’ “Black Panther: Wakanda Forever” in theaters November 11. 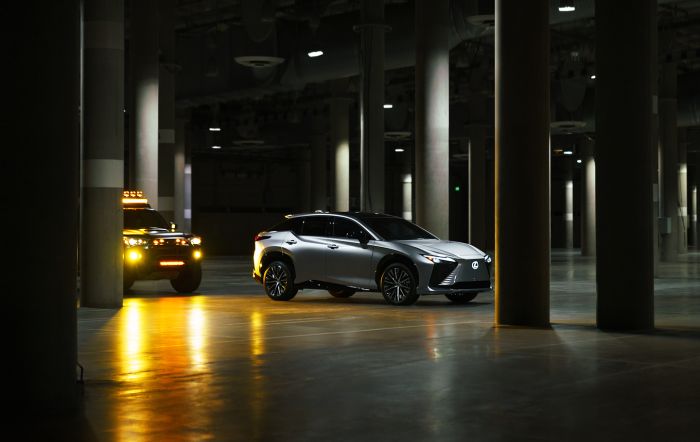 While the Lexus LC 500 Convertible and the Lexus GX make appearances in the actual film, the 90-second collaboration video takes viewers on an exhilarating ride set in the MCU with members of the Dora Milaje–led by General Okoye (played by Danai Gurira)–evading pursuers in the Lexus RZ 450e–a luxurious, technologically advanced vehicle fit for everyone.

Check out the commercial below:

“By returning to our successful relationship with Marvel Studios for the highly anticipated sequel to ‘Black Panther’ we are taking this collaboration to another level,” said Vinay Shahani, Lexus Vice president of Marketing.

“The technology, creativity, and imagination we encounter in the futuristic nation of Wakanda is a natural fit for the sustainable, global society Lexus envisions with the introduction of our most advanced vehicle ever, the fully-electric RZ 450e, further extending our electrified vehicle portfolio.”

“The power, elegance, and future-forward vision of the Lexus brand aligns perfectly with the Black Panther franchise. We couldn’t be happier to team up with Lexus once again to bring an action-packed story and supporting 360 campaign to life.”

Lexus’ collaboration with “Black Panther: Wakanda Forever” and the ad creation is being led by Lexus’ agency of record for Black, Hispanic and LGBTQ+ audiences, Walton Isaacson.

The commercial was directed by award-winning, fourth-generation filmmaker Anthony Leonardi III who was involved with Marvel Studios’ “Avengers: Endgame” and the Lexus “Parking Spot” ad in support of Marvel Studios “Eternals.”

When asked about her involvement in the campaign, Gurira had this to say.

“It’s very cool to be a part of the Lexus campaign and it’s been a great experience for exploring my character in a way that I haven’t before. We got to delve into a whole other narrative while discovering how a new electric Lexus is about to impact the world. I love that combination, so it’s been awesome.”

“An Electric Future” will be featured in an integrated marketing campaign, with placements across a variety of media platforms including broadcast, digital, advanced TV, and social channels.