Set for a Nov. 18 release, the deluxe anniversary edition features the ten original album master tracks plus seven bonus tracks consisting of five alternate takes, a session outtake, and an Oscar-nominated Best Original Song from the same era. The bonus tracks will make their digital debut. The title will be available on CD and digital formats and is now available for pre-order. 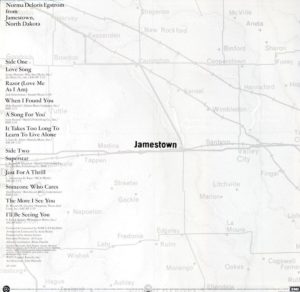 Originally released in 1972, the album was Lee’s 40th and her last for Capitol Records. The result of a brilliant collaboration between acclaimed producer Tom Catalano (Neil Diamond, Anne Murray), renowned arranger Artie Butler (Louis Armstrong, Barry Manilow, Dionne Warwick), and Lee’s manager and album coordinator Brian Panella, Norma Deloris Egstrom From Jamestown, North Dakota is widely regarded as one of her most beloved albums of all time and an artistic tour de force.

With a title that pays tribute to her roots, the introspective album includes such enduring classics as “A Song for You,” “Just for a Thrill,” “Superstar, “ “The More I See You,” “I’ll Be Seeing You,” and many other songs about love, loss, and longing. The 23-page booklet, annotated by Iván Santiago, features new interviews with Tom Catalano, Artie Butler, and Brian Panella and previously unseen photos from the 1972 recording session.

This spring saw the release of a new edition of Miss Peggy Lee: An Autobiography. First published in 1989, the 2022 version features her never-before-released book of poetry, Softly With Feeling; a new cover; an epilogue by jazz and music writer Will Friedwald; a comprehensive discography and recommended listening section compiled by archivist Iván Santiago; and a new foreword by Peggy’s granddaughter, Holly Foster Wells.

Following Lee’s 2020 centennial, the celebrations for this extraordinary jazz legend continue, including a GRAMMY Museum exhibit, “100 Years of Peggy Lee,” which was recently extended until May 2023; a CBS Sunday Morning profile tracing “Peggy Lee and her cool power” back to her beginnings in North Dakota; and a recent Hollywood Bowl tribute to Peggy Lee and Frank Sinatra with the Count Basie Orchestra, featuring special guests Billie Eilish, Debbie Harry, Dianne Reeves, Brian Stokes Mitchell, and Seth MacFarlane, among others.

Born Norma Deloris Egstrom in Jamestown, North Dakota, she was christened Peggy Lee in 1937 by a local North Dakota DJ, Ken Kennedy. With her captivating voice and sultry style, Lee helped redefine what it meant to be a female singer and artist, breaking barriers and blazing trails for generations of artists who have followed.

Coined “the female Frank Sinatra” by Tony Bennett, Lee did something few of her male counterparts attempted: she wrote songs. As one of the first contemporary singer-songwriters, Lee ranks among the most successful female singer-songwriters in the annals of American popular music. Over her remarkable seven-decade career, she wrote over 270 songs and recorded over 1,100 masters.