A new episode of “Young Rock” airs on NBC tonight and we wanted to whet your palates with a little insight from the show’s stars.

BOSSIP Sr. Content Director Janeé Bolden journeyed to Memphis to visit the set of “Young Rock” ahead of the season 3 premiere last week. She spoke with Adrian Groulx and Bradley Constant who play young versions of Dwayne “The Rock” Johnson, as well as Joseph Lee Anderson, who plays Dwayne’s dad, wrestler Rocky Johnson.

We kicked off the interview by asking the actors what it’s been like playing actual real people, who also happen to be famous.

“Easy is not the right word, because there’s a lot of pressure on you, but it’s really fun,” Adrian Groulx told BOSSIP. “When I’m playing Dewey I’m not thinking about the fact that he’s Dwayne because he didn’t know what he was going to become, so I’m just thinking on how I’m going to act in the moment.”

“It’s very exciting,” Bradley Constant told BOSSIP. “I think, over time, because we are on the third season now, it’s even more comfortable, especially after meeting him [Dwayne Johnson] in person recently, it feels very rewarding. It feels like the gratitude I had when I first booked it, and it was such a huge role, it was very exciting and it kind of has morphed into this family I’ve created. Playing the role feels rewarding because it feels so relatable to my childhood in some ways. It’s very exciting.” 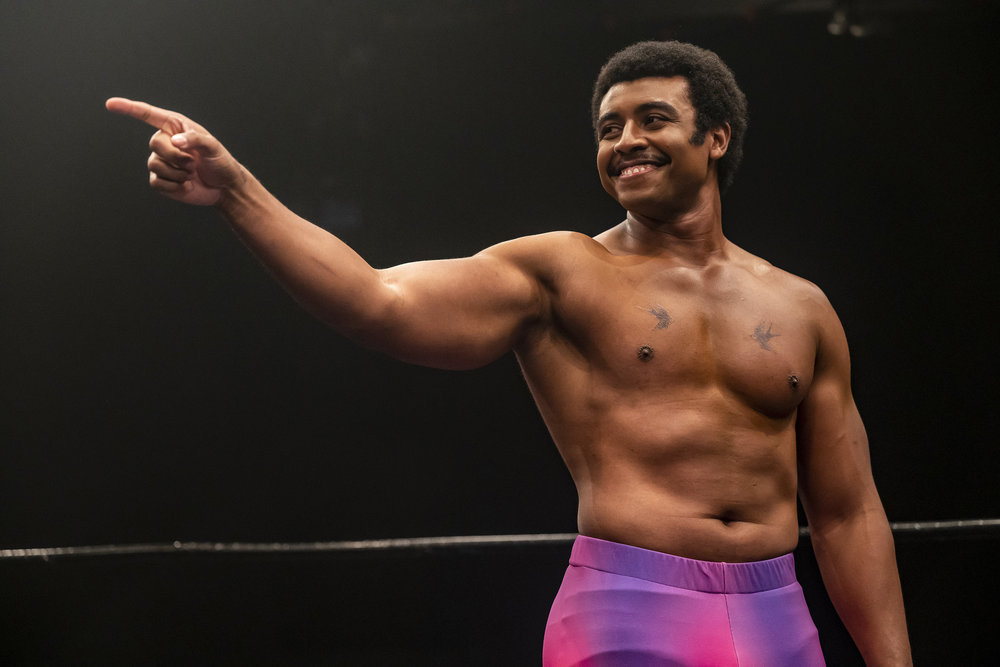 For Joseph Lee Anderson, becoming Rocky has meant growing out his actual hair, sideburns and mustache for a more convincing transformation into the Johnson patriarch.

“The hardest thing for me was the physical aspect of the transformation,” Joseph Lee Anderson told BOSSIP. “It’s been very very, fun, getting to play Rocky. He’s so cool, he’s so likeable, he’s very charismatic which is opposite of me but he’s also very silly and goofy which I try to be all the time. It’s an amazing experience. The fro and the mo [mustache], they add the widow’s peak — but this is all me – the sideys, the mo, the fro.”

We also had to ask Anderson about how difficult it’s been adapting to wearing his wrestling wardrobe — which is primarily compression shorts and tights.

“I’m just glad I do my squats,” Anderson said. “At first it was pretty scary because it’s like, ‘Aw man what’s Twitter going to say? After the first season, after the second wrestling scene, it was like okay, we’re good.”

Probably the best part of being part of the “Young Rock” audience is getting to see The Rock’s life experiences play out on television. Similarly, the actors on the show told us they’ve learned so much about Dwayne Johnson just by showing up for work. 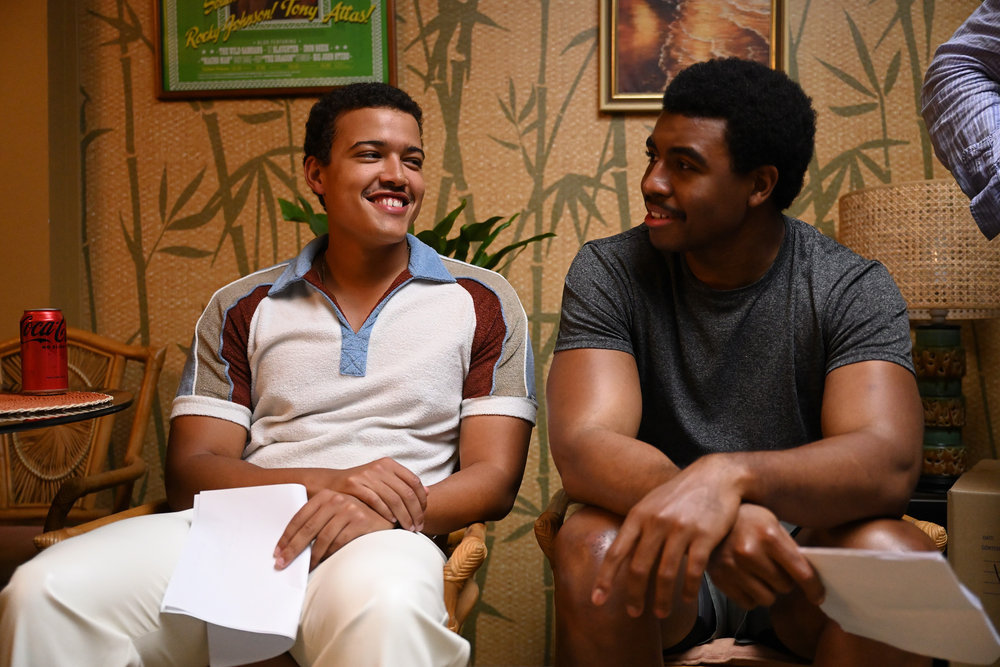 “I knew nothing about Dwayne besides that he was The Rock. That was it,” Joseph Lee Anderson told BOSSIP. So I’m learning all these things. He didn’t come from money. When I found out his dad was a wrestler, I thought, ‘Okay so he’s been good all his life.’ But that’s definitely not the case. I learned everything about who Dwayne really is and how he’s become who he is now.”

“It’s pretty much the same for me,” Bradley Constant chimed in. “I’m learning so much more about the wrestling history. I was born in 1998, a lot of these wrestlers who were really big, like Rocky Johnson I had no clue about. It’s funny when I booked this role I told my dad, ‘I’m gonna play The Rock.’ He said ‘Son, what you know about Rocky Johnson?’ He was trying to give me this whole lesson about Rocky Johnson, he didn’t even know Rocky Johnson would be on the show. Now Joseph is his favorite character. I’ve learned so much about wrestling in general. I’ve also grown with this show as a person — because of the show, because of the character that I’m playing, because I’m looking at a reflection of me when I was a teenager too.” 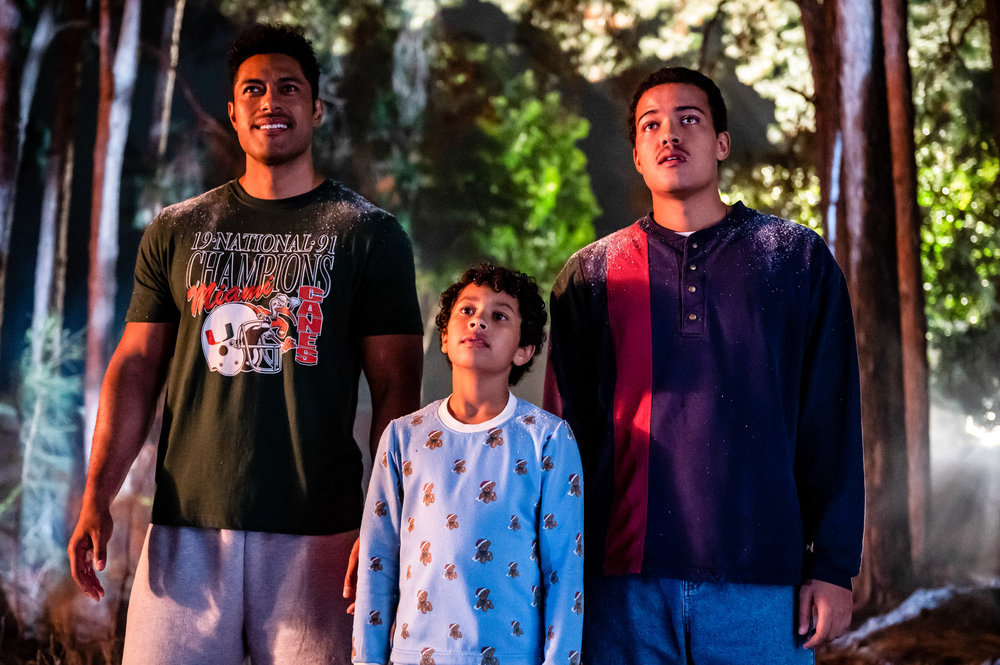 “I’ve learned a lot about how Dwayne became Dwayne because I knew him as this big guy who was a wrestler, who made it to acting, he was doing everything everyone wants to do,” Adrian Groulx added. “That’s what I knew him as before I came here to do the show. It was great getting to, not just learn about it, but to be the person. We can all learn about it just by watching the show, but being there in the moment, recreating what happened, makes it ten times better to understand what actually happened.”

With the show now in its third season, we had to ask each of the actors about their favorite episodes from the first and second seasons. 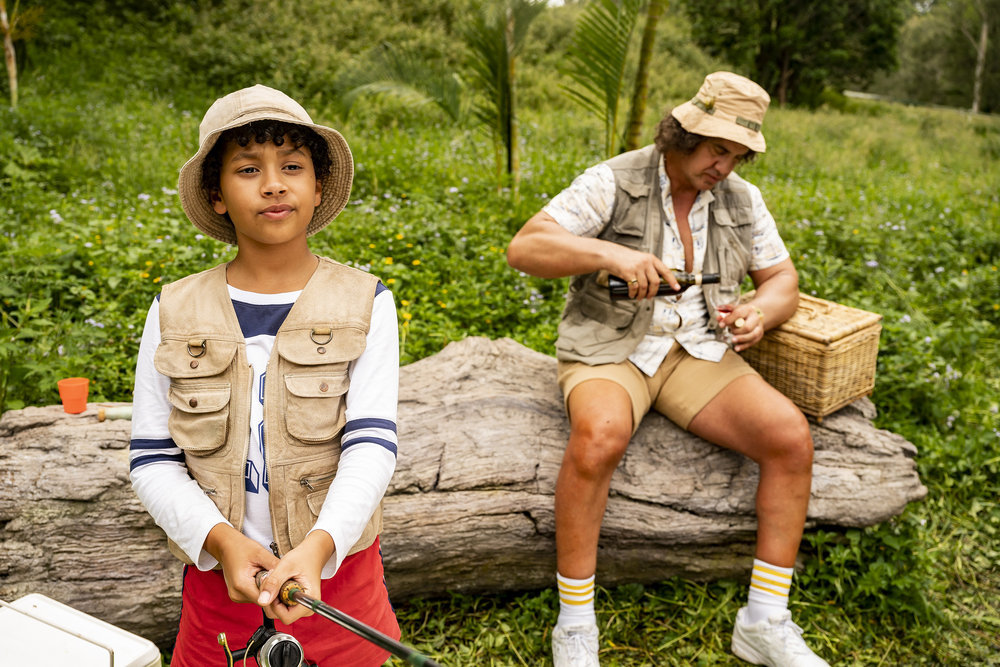 “In season one, it was my day with Andre [the giant],” Adrian Groulx told BOSSIP. “Then season two it was my wrestling.”

“First season my favorite moment was the Hans and Franz moment,” Bradley Constant told BOSSIP. “Second season I got to watch Joseph wrestle a lot and there was a part where we get to watch him get slammed into tables over and over again. That was probably my favorite bit from the second season. I wanted to do it myself but they wouldn’t let me. Another from the second was Adrian when he got up and was wrestling with Rocky. That was pretty cool.” 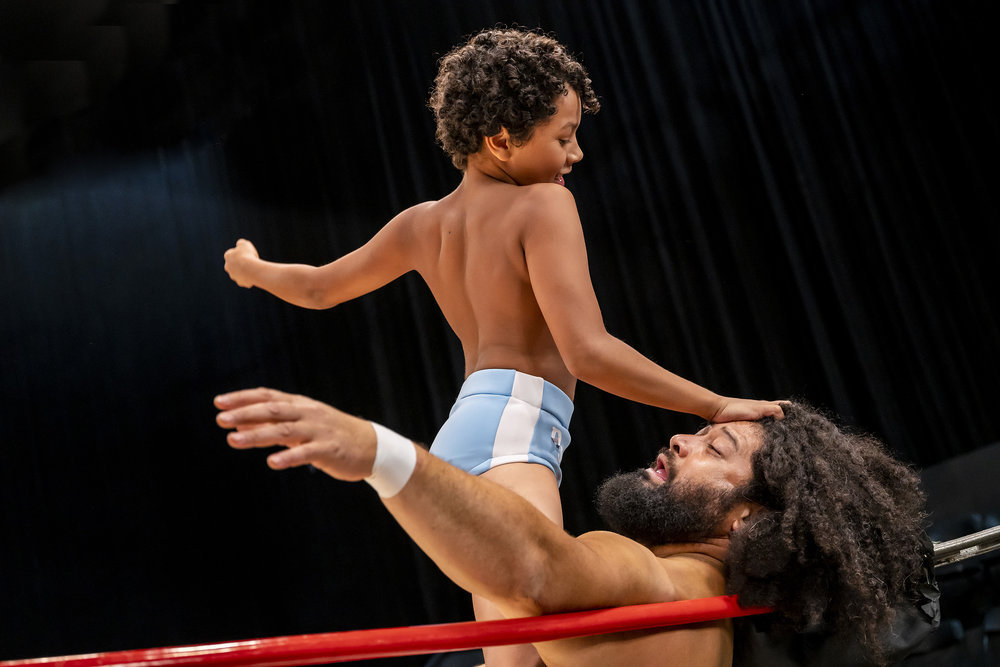 “The very first wrestling match, because it was my first time wrestling,” Joseph Lee Anderson added.

For folks who have never watched “Young Rock,” we HIGHLY encourage you to jump right in. The fun part about the show is that it jumps around different parts of Dwayne Johnson’s life, so you don’t necessarily have to start from the very beginning of the show.

“They never know how much they can relate to Dwayne,” Adrian Groulx told BOSSIP. “They might know Dwayne and watch all his other movies and shows but not know how he really got to where he is now. Just to learn about how he was as a kid, in high school, how he developed the heartfelt personality that he has. 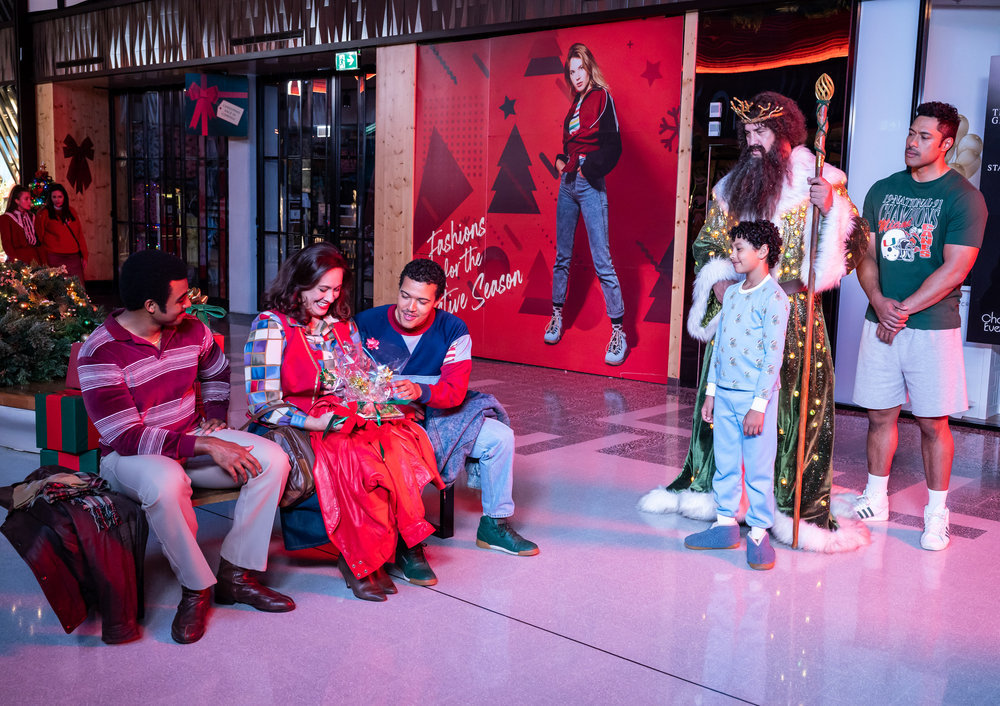 “There’s a healthy balance of seeing the Rock for what people want to see, they want to see the wrestling, they want to see these iconic moments, but there’s also a really healthy balance of normality and relatability that I think keeps people,” Bradley Constant added. “We continue to build an audience because families can watch together and they can relate with the family struggles, they can relate with the characters. They’re real people.”

“It’s real and we do a good job of portraying those real moments,” Joseph Lee Anderson added. “But at the same time, we keep it lighthearted. A lot of times you don’t want to see that mega drama, you want to laugh – so you’re going to laugh, you’re gonna see Uli (Latukefu) and I in booty shorts – that’s why we made it to season 3, to be honest. If you want to have a good time, you want to laugh and relax with the family then this is the show for you.